Saramago and his definition of a son

I recently read a little text about the definition of a son/daughter. The text is as follows: 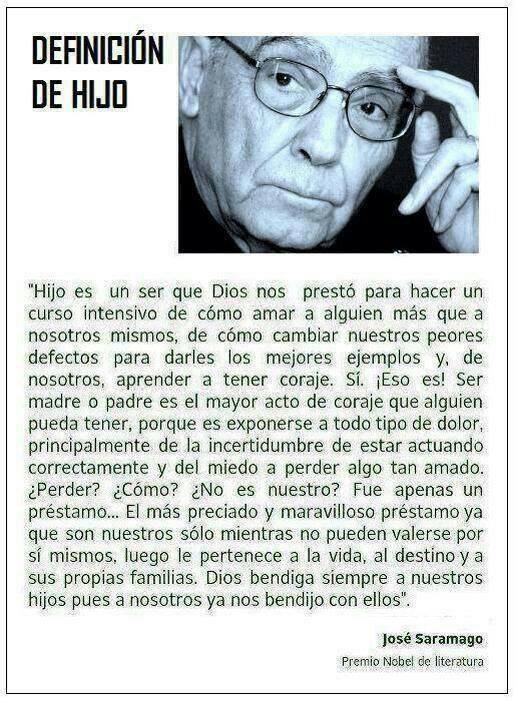 It is, of course, a text by José Saramago, and reading it we can appreciate the author’s magnificent ability.

Here is my translation. Please note that hijo refers to both son and daughter in Spanish:

Son is a being that God loaned us, so we could take a crash course on how to love someone more than ourselves, how to change our weaknesses to provide the best examples and for them to learn, from us, to have a great courage. Yes, that’s it! Being a mother or a father is the most courageous act anybody could do, because it is to expose yourself to all kind of pain, mostly about the uncertainty of not knowing if you are acting correctly and the fear to lose what you love so much. Lose? How? Don’t they belong to me? It was just a loan… the most precious and wonderful loan because they are only ours whilst they can’t fend for themselves, after that they belong to life, destiny and their own families. God bless our kids because he already blessed us with them.

I started reading Saramago curiously after watching a film based on one of his novels, the film entitled Enemy is an adaptation of the novel by this Portuguese writer, entitled The Double.About Saramago, a lot has already been said. His capacity as a writer is undeniable (well, he is a nobel prize winner after all!), I personally love his way of writing, its simplicity and elegance.

Some of his most famous titles are: